The world is full of crooks, cheats, and liars. Making money off unsuspecting homeowners, especially older ones, is an age-old issue.

Roofing in Denver is big business. Storm chasers and high-pressure door knockers from all parts of the country come here to sell. A handful are trustworthy–most are not.

During our storm season (roughly May through September) it’s common to see stories on the news warning residents to watch out for roofing scams. You know, the ones who knock on your door, collect your deposit, and then disappear.

In my 8 years of roofing, it’s very rare to come across a homeowner who truly understands the insurance claim process. Replacing a roof after a hail storm isn’t complicated.

That’s pretty much it in a nutshell. Nothing fancy.

(if you haven’t read my post about the Truth About the Insurance Claims Process, you should!)

But, what happens when your roofer bills the insurance company for items they didn’t complete? What do you do and how would you even know??

Fortunately for John, he felt that something was off and asked around for another roofer (which, he probably should have done in the first place!) and that’s when he found me.

John shared with me his concerns over the bill his roofer submitted to him/USAA vs. the work they actually completed. John had worked in construction prior to retiring so he had some knowledge of the process (not roofing, though).

He knew basic roofing components and, as he read through the bill, started pointing out various line items that were never completed. Gutters, vent caps, counter flashing, and the patio roof covering were all things he flagged.

Both his sales rep and the company owner wouldn’t answer his questions with a response that made sense. It was all just a bunch of runaround and, after reviewing some complaints online from past customers, seems to be par for the course with them.

Now, this is a company who has been in business since the early ’80s. Outside of a few bad reviews, they seem like a reputable company. This isn’t their first rodeo, that’s for sure.

I don’t fault John for choosing them to work his claim. On the surface, they seemed like a trustworthy company.

Well, now let’s just get into what I discovered and uncovered during my inspection and review of the claim…

To be fair, I have made mistakes before on my jobs, especially early on, and things didn’t always run as smoothly as they do now. But, we’re talking mostly minor issues and relatively few ones–all of which I corrected in the end.

For John, I did my best to evaluate his roof as a true 3rd party inspector, with no bias toward him or the contractor. I wanted to take in everything at face value.

As soon as I got to the top of my ladder, I spotted the first issue and started working my way around the roof. Here’s what I found: 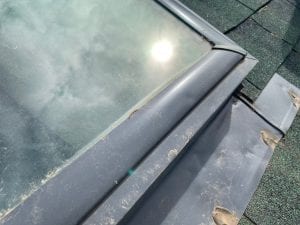 There’s a reason we don’t reuse old materials during a re-roof. Yes, it’s cheaper to do it like that, but reusing old metals creates a greater risk for roof leaks down the road. It’s simply not a good business practice.

Problem here, though, wasn’t the reusing of materials–it was reusing them and THEN billing for it to USAA as new and asking the homeowner to sign off that the work was completed.

See, most homeowners have never been up on their roofs. We certainly don’t recommend it, but in this case, John’s roof is one-story, not steep, and he’s comfortable getting up and down the ladder. He came up with me during my inspection and I was able to point out all of the issues I saw.

Our meeting turned awkward as the other roofer showed up as we were finishing up!

Whoops! John hadn’t meant for him to come out while I was still there. This led to a barrage of questions and accusations from the other roofer. I pointed out a few of the areas of concern and the responses I received were just as bad as the work they had performed. He deflected and dodged as best as he could before leaving.

I couldn’t tell if he was incompetent or was just lying to cover himself.

Back at my office, I was able to go through all of the paperwork, including the other roofer’s bill to the homeowner, more clearly now that I had been on the roof.

The line items I listed above were just the ones USAA had approved that they didn’t do. In total, $3222.47 worth that was over billed.

I also had the supplement request (a list of items the roofer sent to USAA they were hoping would get approved). This list contained another few thousand dollars worth of items that were denied by the adjuster. None of the requested items were legitimate, either.

Because they had been denied, I didn’t include those items in my report.

John knew something was off, but not to the degree I uncovered.

Cheating homeowners and insurance companies is an “easy” way to increase one’s profits. Most of the time, homeowners and adjusters will never find out that they’ve been scammed.

How many homeowners know understand both roofing AND insurance paperwork? Maybe 1 out of 50. Probably less, actually.

Roofers know this and know they can get away with it. This wasn’t a case of a simple oversight. Taking into account the multiple line items not done but billed for, my conversation with the other roofer, and the bad review I read online with a similar issue, it’s clear this is standard practice for this roofing company.

I’m not sure how companies like this continue to stay in business, but it’s also not surprising, either.

There’s very little integrity these days in our industry.

Our 3 main principles are Quality, Efficiency, and Professionalism. Integrity ties into all 3 of these. We’re all about speed, not greed.

John learned a hard lesson on this one, but hopefully bringing me in will make it not sting so badly!